The museum, combining sports culture and urban history with the responsibility of presenting it to members of all ages of the society, takes on an important mission on behalf of Besiktas JK, the Pioneer of sports in our country. Therefore we opened the door of the 115 years of history behind Besiktas JK with Museum curator Canan Curgen for Marmara Life readers.

Besiktas JK (Gymnastics Club) Museum, set on 1650 meter square area is not just a museum for football but is a museum for sports, started with an idea to approach the heritage of a sports club accompanied by today’s technology, awaits visitor at Vodafone Park. The magnificent structure that adds new memories to the old ones has instruments such as sound, light, texture adding to its magnificence as it sheds light to the history and culture of Turkish sports.

Who is Canan Curgen? Let’s first get to know you could you talk about yourself?

I’ve been in the museum profession for the past decade. Before I began working at the Besiktas Jimnastik Kulübü (BJK) I was at the Sait Faik Abasiyanik Museum and before that I worked at the Istanbul Museum of Archeology. I used to work at the Department of Museums as museum researcher. That was the time when I began my Degree on Fine Arts in Yildiz Technical University. I used to work as art gallery manager before I began working in museums. I’ve been in the field for almost 20 years.

How did you get together with Besiktas JK Museum?

Our roads intersected through a fine coincidence. When I heard that the museum was renewed I started to look for ways to somehow coincide our routes as I’ve been a fan since I was ten and have been in the museum sector long enough. The coincidence was that as I was trying to find ways to meet, the museum management was actually looking for a curator. This way our roads intersected because, I applied for the job. At the end of necessary interviews the management decided that I was cut for the job and so I stared working here.

When was Besiktas JK Museum established?

Besiktas JK Museum was opened on 14 February 2017 in Vodafone Park as St.Valentines’s Day gift to fans by our Chairman Fikret Orman. There were 2 years of work conducted prior to the official opening. In 2001 it was inside the Inonu Stadium as Turkey’s first ever Private Sports Museum. The registration of the Private Museum was made in 2007. During the transformation period of Inonu Stadium into Vodafone Park the museum was also upgraded accordingly to fit the smart stadium structure in terms of museumological and museumographical manners and designed over again to fit to current needs and become what it is today. 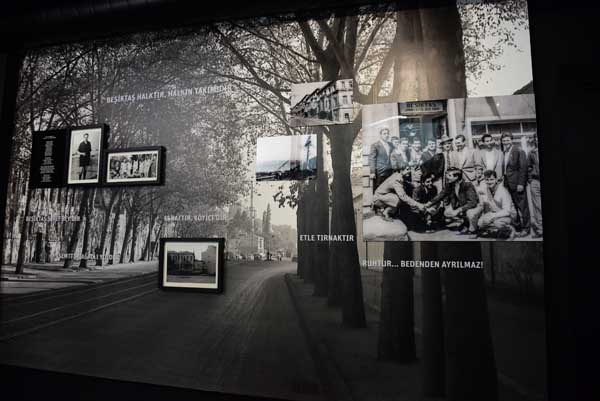 Below the BJK Museum is the Agacli Yol installation

A museum redesigned and planned right

Therefore we opened the door of the 115 years of history behind Besiktas JK with Museum curator Canan Curgen for Marmara Life readers. 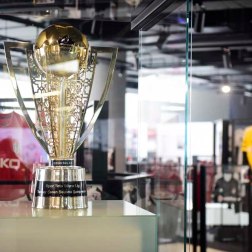 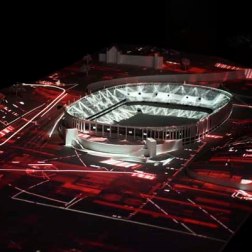 This is everyone’s museum!

‘This is Your Story Being Told’

The notions related to museums are rapidly changing once again technology continues to shape our lives even in this aspect. What’s the role of technology in Besiktas JK?

Our museum has been in operation since 2001 however as Inonu Stadium was being transformed into Vodafone Park, the dominant determiner of the plan was the notion of “smart stadium” starting off from the point that technology is more efficient and easy to share. The smart stadium project has also been a determiner for the changes in the museum. We built the museum to be interactive with visitors making it a place of memory where they can add their ideas and emotions to the experience. We also took into account the elements of contemporary museum criteria and thought as to how we could implement interaction into it, than we planned digital applications. The planning process was parallel to the stadium building process as a result of the versatile common production of ideas the 115 years history of Besiktas JK was presented in a way that visitors could learn about the Turkish history of the time. We tried to visualize all that I have mentioned in the museum. Our museum is far more than being just a cup display venue. As a matter of fact we can say that for the fans “this is your story being told” but we are not just addressing our fan-base. We target all sports enthusiasts. We are a club that takes hold of fair play values all the while strengthening through our own values. Therefore you cannot come across any provocative or belittling statement anywhere in the museum. Competition is at the field for sure but inside we are all friends because we nourish through sports. We are all aware that the digital world is becoming a bigger part of our life day by day. That is why the new medium shows-off at the museum and we made it our priority to benefits from it. As a result the headline that is becoming important is “informing the visitors through objects.” Our aim is to bring out the information from all objects and create a story. It is our common target to be the center of attraction to deliver the information to the younger generation born in the digital world. We do have static, window displays but we also provide different digital applications that help visitors interact with the content.

What are the areas of application, what will greet visitors?

We have a karaoke room, where you can pick one or more of the 15 Besiktas marches to sing along to alone or with friends. A place where you feel the joy of being in stadium. In our Decibel room we have 4 record breaking chants. One of these was the 2007 Liverpool game with 132 decibel chanting recorded. We applied a simulation with the record and gives you the feeling of being in the stadium while breaking the record but surely the sound is not at 132 decibels as it was in reality we left it at 90 decibels. We also display the record and the graphs of it showing the scale through the infographic, where different sounds were scaled. We also have a game to embed the love for sports and the notion of belongingness for 3-7 year-old children regardless of their favorite team. There are three digital kiosks and in every kiosk there is a baby eagle in an egg. The children and the baby eagles experience interaction for a period of 4 weeks through a RFID bracelet. Once they come to the museum to buy the bracelet they feed the baby eagle with fan love and fair play values. Our museum is disabled friendly. All passages and displays have been designed taking into consideration Wheel chairs and their need for space. There are visually impaired friendly floor tiles. We produced real life size replicas of many objects through 3D modelling. There are information pamphlets we printed in Braille. When we planned the applications we invited different groups with disabilities that we regularly work togethe with to provide feedback on the applications. We received very good, valuable feedback on the beta testing efforts conducted. These efforts are of great importance to us in order to make the museum a living structure.

This is a sports history museum it also has a mission to function as the memory card of the country. All the objects that have been donated have a memory and history.

Yes, this is everyone’s museum; a place where cultural heritage is collected, preserved and a place where sports and artistic events have been researched and displayed. A museum that takes on their cultural heritage as their identity will document what was lived and what identities were in the past. Sports express mutual agreement, solidarity and team spirit. Feel, share and be part of it, this is our motto. There are other sports branches as well, the historical memory of the museum is separated by decades as far back as a century up to our current day. The jerseys, cups, football players’ photographs that are on display here are in the memories of all from 7 to 77. We believe to have managed to deliver our museum’s mission and vision through contemporary museology. For example we offer digital solutions in historical explanation to increase access to information for less fortunate groups and children. Besiktas museum has caught up the contemporary times and our doors are open to everyone country wide as the biggest sports museum of Turkey. We draw our power from our core and are a club that always progresses through team spirit. We define our stand through fair play. Surely all this makes Besiktas GC Museum everyone’s museum…

*Besiktas JK Museum is placed on a two floor structure of 1650 meter square and holds the quality of being the most inclusive museum in Turkey. It sheds light to history. It has loads of displays, collections and information as well as messages.

*You can have access to information on all sports branches not just football. Sports and arts are combined as it also hosts art exhibitions. All age groups are addressed at the museum which was re-designed up to even the smallest detail. There are places where visitors can interact, experience and discover through touching objects.

*The over 50 digital applications at the Besiktas JK museum, offer visitors a chance to get informed on other sports branches along with an interactive experience. It has its own “bench”, “karaoke” appliances for fan chants in the room, Virtual Reality application where you can tour around as if you were in Vodafone Park as well as a decibel scale measuring according to fan passion level experience.

*It takes you to a different world compared to the old-school museums with virtual goggles, roller coaster experience, karaoke room and other digital interaction devices. The place which is more than a museum offers children and adult

*This article was  published in the July-August issue of Marmara Life.