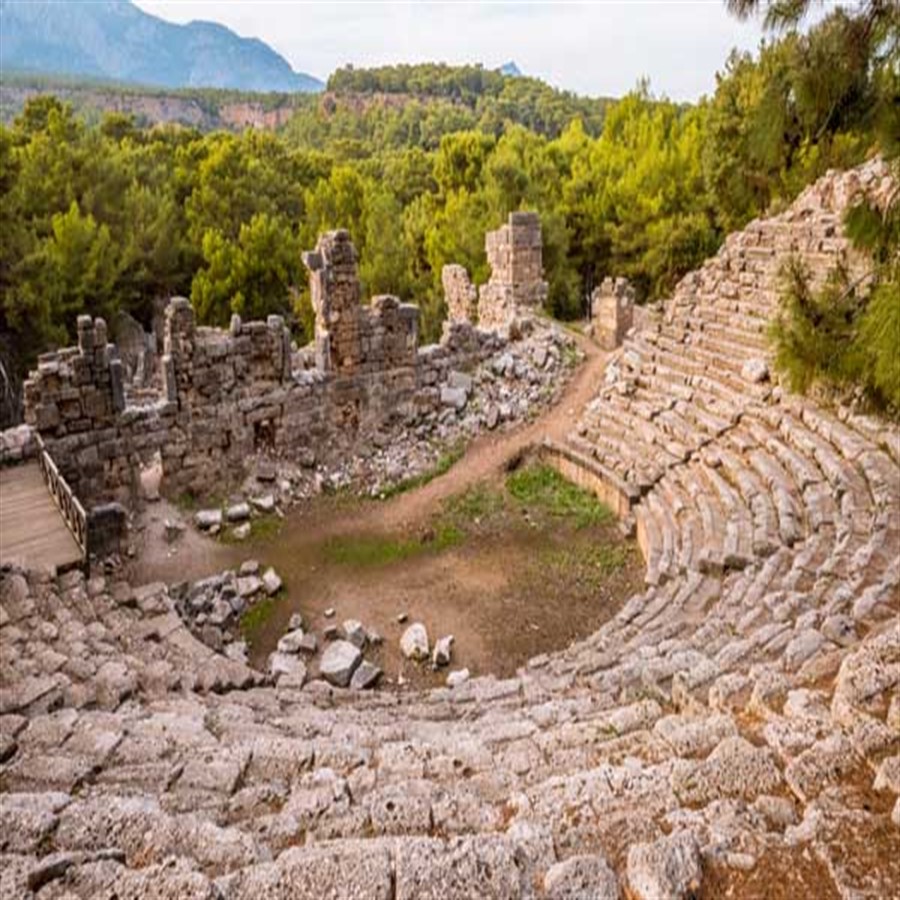 The Mediterranean stretches from Lycia to Caria from one end to the other. The western borders of Lycia are the Massikytos Mountain (Akdag) and Indos stream (Dalaman brook), eastern borders Solyma (Beydag mountain) and Limyros stream (Alakır brook). The Patara Road relics have defined that in the archaic and classical periods the border was the area between Daidala (Inlice Monument) and Telmessos (Mugla, Fethiye). The northern borders of Lycia are thought to be; the three brooks that feed from the basin located at the end of the Toros mountains (Ksanthos [Esen Brook], Myros [Demre Brook], Arykandos [Başgöz Brook]) that head towards northern waterways. Khoma, Podalia and Nisa cities located in the Elmali plains of the Roman Empire joined Lycia as they enabled Lycia’s political presence in the northern geography. The Kibyra Zone joined the Lycia Union during the Roman Empire era and enabled them to print coins. The zone was known to be the first of Phrygian influence and became part of the Asian State of the early Roman Republic term in the Archaic and Classical periods. The north border is 12 kilometers northeast to Antalya city center, bordering Termessos, in Elmali district is a scripture in Muren village, informing that there was dispute regarding land rented to Termessos by the Lycian Union. It is clear that the Lycian north border was spread until here around the beginning of Imperial times. Golgeli Mountains, Ak Mountains and Bey Mountains from the east to the west separate Lycia into districts.

There were prosperous plains in the east and west parts of Lycia. Among these were Phoenicia, Demre, Esencay valleys rich delta plains as well as Elmali plain towards the northern parts that were included in rich plains. The water systems that fed these rich plains  were also numerous. The streams that fled from mountain tops were Limyros, Arykandos, Myros, Ksanthos, Glaukos (Nif brook) and Indos (Dalaman brook) listed from east to west. This mountain area and desolate geography was seen to be somewhat isolated from the north closed to various effects. Both Kragos (Boncuk Mountain) and Antikragos (Baba Mountain) were the Indos and Glaukos streams that spread towards forestall areas in narrow paths that lead to Caria. The district has signs of cultural influence between Caria and Lycia. Especially in coins issued, the signs of Carian language were translated into Lycian. It is to historians’ knowledge that while towards the west of Lycia there was an influence of the Carian culture, on the shores the Helen culture was more dominant. Located in the mouth of Alakir Brook, Rhodiapolic (nearby Kumluca) in B.C. VII. century, and Corydalla (Haciveliler), Gagai (Yenice), Phaselis cities were colonies of Rhodos. It is informed that Lycia was attractive for foreign powers with its location in proximity to Egypt, Cyprus and the Aegean sea; with above and underground natural sources and their unique cultural richness.

MER PEOPLE
A traveler who decides to give in to the civilization of light, should prepare to travel along cities which have been embroidered in a way that outshine fairy tales from the North to the South, East to the West. The first information on the Lycians comes from Homer. Famous poet Homer talked about Lycian Sarpedon and other Lycian commanders as heroes. Lukkas who have been mentioned in Hittites scrolls and Egyptian hieroglyphics are said to be Lycians’ predecessors. In the Qadesh Wars they were named as allies of Hittites by III. Remises who is quoted to refer to them as «Mer people » who lived in the same geographical location however had no political unity amongst themselves. Lukkas that are one of the important lines of Luvis, were known to have been in power for a very long time through Lycian culture in terms of language and religion. He relates Lycians with Termilais people who arrived in the area with Cretan Sarpedon. It is assumed that the Lycians referred to by Homer are Lukkas settled in Caria and the Termilai referred to by many poets of antiquity such as Herodotus were all immigrants from Crete that had socialized with the Lukkas to form a new group eventually. One of the most interesting aspects of Lycians other than their roots was their history. It is assumed that some of the coastal cities have been overtaken by Rhodes during the B.C.7 century colonization movement. The reason behind the failure to colonize cities beyond coastal lines could be the locals joining forces against influences by new comers. Lycians were known to have been free until Persian domain. As a result of the great-war against the Persians, Ksanthos city had been ruined to the ground. Signs of Hellenistic influence recovered in  Lycia under Persian domain, can be recognized though bilingual scriptures. While Helen names are considerably numerous in scrolls, the Persian names within the same scrolls reflect the size of the influence. In B.C. 358- 337 Persians turn-over the rule of Lycia to Caria Satrap Mausollos. In a time when tax is also paid to Satrap Mausollos, Caria west to Lycia under Lycian influence socializes the people of the two cities. Piksadoros, the brother of Mausollos, took power after him and had power until the arrival of Alexander the Great to Lycia. The proof of city states’ cultural influence on each other is easily recognized through Lycian scriptures having Carian names in the day. Alexander is known to have spent the winter of B.C. 334-333 in Lycia while traveling from Macedonia to Anatolia. Egypt’s Ptolemaios was the first Hellenistic State to take over Lycia upon Alexander’s death in B.C. 323 resulting in a dispute among his commanders. Hellenistic states were seen to have taken stand against Roman force during this time. King III. Antiokhos of Seleukos marched towards the west in B.C. 190 and encountered Romans, that achieved allies with Rhodes and Pergamon, and chose Phaselis as their base and presented Caria and Lycia to his ally Rhodes. However the heavy tax burden and dictatorial domain by Rhodes, over- whelmed Lycia who applied at the Senate in Rome where Lycia was declared free. Having rid Rhodes’ influence and attained their very much appreciated freedom, Lycia started federal unity and started off with a 23-city-state council. The idea of Parliament started out with the civilization of light of Lycia.

LYCIA ROAD
In case out traveler wishes to walk through the cities of Lycia then a long road starting from Dalaman towards Olympos with unique scenery awaits him. Although the journey is related to the speed of the traveler the route is a 40 day route that will enable visiting all Lycian cities that are connected to one another. Most parts of Anatolia have been intertwined by Roman roads like a cobweb. Then in the Mediterranean the Lycian roads from Caria formed a rout from the west to the east connecting the cities. One of the most important cities of the early Lycian era was Xhantos Acropolis. Letoon is like a treasure waiting to be discovered on the coasts of Patara with unique sandy beaches of 18 kilometers. Among some early settlements Pinara, Tlos, Sidyma, Kadyanda in west Lycia, Limyra, Gurses, Myra, Sura, Trysa, Hoyran, Tyberissos, Teimiusa, Korba, Tuse, Major Avsar, Apollonia, Dereagzi, Phellos, Arneai, Kandyba, Isinda, Bayindir harbour in central Lycia and Aricanda, Kymira, Olympos in  the east are worth seeing. The water requirement of the early settlements was mainly covered through cisterns carved in rocks. There were not many water sources within city walls. Due to the geographical structure of Lycia agriculture areas were very limited and the small and middle sized settlement areas were spread around. There were olive oil and wine press facilities and settlements carved into rocks around the cities. The settlements of Lycians have either been placed on steps on slopes or carved into rocky areas. Lycians were the civilization famous for doting their independence and the creators of the word democracy. Being called the civilization of light in Anatolia was based on the same reasons. Their most important aspect was that they were maritime civilizations and informed of all development in the Mediterranean through harbors. Lycians were recorded to have faced the Romans during the Magnesia war just for once, Lycians have been able to maintain independence in Anatolia through politics however they have been recorded to be a civilization of both wisdom and combat through city state ruins recovered. A traveler who ventures a walk on long and rough land for days in unique marine scenery will travel the Mediterranean from one end to the other visiting all Lycian cities to enjoy the memorable unique structures, the very well preserved theaters and massive king tombs of a fairy tale like civilizations. No article would be complete without having seen the cities of the Lycian Union, having walked in the heavenly nature of the area… Discovering the stone structures built and forged into rocks with pristine mastery by nature and history will be a traveler’s most beautiful journey of a life time seeing the civilization of Light of Anatolia. So are you ready to start?

LETOON
On the main road to Kas – Fethiye, about 50 kilometers to Kas are the Letoon ruins at 4 kilometers from Kinik. The archeological remains in Letoon show that it was set around B.C. 7th century. It is to our knowledge that in the Archaic and Classical periods of Anatolia (B.C. 7-5) there was the culture of Goddesses and Nymphs.

TELMESOS
In antiquity Fethiye was called; Telmessos. It is known that this city was set on the border of Lycai and Caria civilizations in B.C.5 century. According to the information we recovered from the ruins it is to our knowledge that the city was rich and had high standards of cultute during he Helen and Roman eras and was famous for being amoung prophecy centrals dedicated to Apollo the God.

XHANTOS
It is the oldest and biggest city of the mountainous Lycian state, located 55 kilometers to Fethiye on the road to Kas. The real city consists of Lycian and Roman Acropolises and other quarters. It was the administrative and religious central of Lycian state.

PATARA
The city located on the Kalkan-Fethiye main-road, 14 kilometers from Kalkan was recorded in Hittites scriptures in B.C. 23 century informs that just like Xanthos, Patara was also one of the earliest settlements of the Lycian region. The city which was the biggest and most commonly used harbor of the district never lost importance and according to scriptures and coins the name of the city in Lycian was Pttara, in the Hellenistic era it is referred to as Batara in Arabic. In the Hellenistic era, it was the center of prophecy for the god Apollo and one of the cities that had 3 votes in the Lycian Union. During the Byzantine era Patara was famous as the birth place of Saint Nicholas. It was a harbor city that pilgrims on their way to holy lands stopped-over at.

*This article was  published in the  September – October issue of Marmara Life.