Two years after our  interview on motivation and entrepreneurship, we got together with Ahmet Eryilmaz once again to have a fun and satisfactory interview on “Cultural Codes and Turkish style management”…

We had a chat with Ahmet Eryilmaz about the influences of cultural codes on management and the influences of management style on business and public life, who said “Today, there are cultural gaps in business life: Some companies dwell in the past, while some in the future. And Turkish style management is passing through a compatibility test. It will either become introverted or catch up” Eryilmaz, who calls himself “a street cat” has over 35 years of experience in training and human resources.

Based on your professional experiences on Human Resources Management for over 35 years, what would your answer be to the question: “What is Turkish style management?”
Turkish style, eh? I do not like being didactic, however forgive me for having to explain this much. If we are to talk about a management style, our topic is; cultural environment, ambient determinants, group norms, compatibility behavior. Do not fear as this is not my usual style in explaining. I have given these as key words. In case someone is curious and wants to research on the Internet, this is the basic information of the things I am going to say. Oh and, this is not exactly the field of management science, it is closer to social psychology. Let me define culture, so the readers and I are on the same page. Culture is concerted actions. Stabilized thoughts with continuity shared by many people … When I say many people, you might think how many that may be, in which case it is as many as the source person’s coverage zone. That is why the media is considered as a kind of ‘management power’. The media have invented flashy scientific terms. For example they call the spreading of attitudes: ‘social contagion’. Another example is that, they called the tendency of people not question their attitudes close mindedly as ‘social truth’. Some actions with the broadest scopes were called ‘high culture’; of course in this case the lesser scopes were called ‘subculture’ (subculture does not mean unworthy, it just means that they have narrower scope). Enough with the substructure information… What did you ask again, Turkish style management right? Well that is the culture in each company. Some call it ‘corporate climate’. Nice phrase. Let’s continue with some examples, it will be much more fun. In our ancient culture, there is ‘the wish of the man of power’, or ‘getting angry’. To rephrase it in lecturer style, these are all cultural codes. Just like the command phrases of software. That is what is expected from fathers at home. That is what the patriarch does. The commander’s  action.  Actually, the ‘headquarter’ does that. It is not a joke, take it metaphorically and use it in any way you want. In an old Turkish movie they said, this is the order from Ankara, as an equivalent to that term. And that is what the manager does. They can get angry, yell at the employees, dislike what is done, discriminate and fire you, right? This is what you call Turkish style. You cannot conduct a performance assessment on that manager, neither give feedback nor get them to do proper delegation. These are not taught at business schools, faculty of management, and are denied by managerial sciences. The HR staff pretends as if such a thing does not exist. So, it is known yet unspoken.

How do the personalization of management styles shape productivity?
Once again, we need to agree on the concept. There is a notion called management style in textbooks in which widely accepted styles are explained in a general manner. A kind of categorization. As far as I understand, this is not what you are asking; you are talking about totally personalizing. That is to say personal character traits reflect on the manager, right? Yes, that happens. As a matter of fact, years ago one of the famous management scholars came up with the concept ‘managing the manager’. That meant the employees know their manager’s suits and conduct innocent phrasing arrangements. What time does he think clearer? When to talk and when to stay silent, which would be the better choice? How will I get his attention better? In an unexpected situation, how much authority can one use? What is his sore spot? Knowing the answers to these actually means making life easier. In other words, it contributes to productivity. It is licit.

We can encounter different management styles even in different branch offices of the same bank. Can we come to the conclusion of how cultural cells work and how those cultural cells are very important management tools through this example?
The other day I tweeted something like this, I still remember, “In banking, there is something called the uniqueness of branch cultures, in their system literally every road leads to that”. It is as if you thought the same thing. Sometimes there is the main bank culture and then there are liberated areas, as a result of the branch manager’s operating system. This is normal. There is nothing to be surprised about. 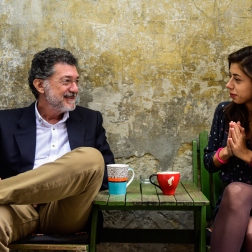 He has been a lecturer in Yeditepe University, Department of Law since 2009. He has also been a board member of Infina Software Company since 2011. He is a blogger, conference speaker, and a management consultant. / 2009’dan beri Yeditepe Hukuk Fakültesi’nde öğretim görevlisi. 2011’den beri İnfina Yazılım Yönetim Kurulu Üyesi. Blogger, konferans konuşmacısı, yönetim danışmanlığı yapmakta.

In one of your articles, you said “Everybody makes deliberate choices between the alternatives of benefits-loss in their own way. For instance, you explain motivation techniques and the difficulties to a group of managers, and they decide to use the best  that fits their employees”. How does this perception and management style work in our society?
It does not work. I talked about the ideal case. I do not regret it; that is the right way. Managers are not given instructions as to how they should manage. Management is not a predetermined course like a game. It is life in itself. If you want to make preliminary preparations, at best you can use real life examples. If something similar comes along, how nice. If not, they get inspired from that incident. If a totally different situation occurs they have to create their own solutions at that moment. We talked about motivation before. It is a terribly applied example. Everybody applies the standard techniques they are thought. Then they are surprised why it does not work. If they do not create their own style, they might as well wait forever for somebody to come and teach them a better technique.

THERE IS NO RIGHT PERSON; EACH CANDIDATE IS A MEANS TO REEVALUATION OF THE JOB!

You say “there is no right person; the job needs to be re-evaluated with each candidate. There is room for flexibility in how the work is done”. That is to say, styles differentiate how  work is done, in that case are different people worth giving a try?
I have defended this throughout my career. In fact I came to a point where I do not believe in job definitions anymore. Definitions just give an idea about the job that is all. Finding the people to match the definition is a dream. You review the job, take a look at the person who is willing to do it, list the pros and cons of each candidate, choose one and say “do it however you will”. Providing that they carry out the essentials of the job, each person does it differently. In other words, there are different people and different results. Fortunately that is the case, because sometimes we encounter amazing surprises. They can do better than what you expected.

People are not born with attitude, they learn through life. Recently a major part of the society has deepened the cultural codes in the anonymous memory. Standardized attitude has come to be. How does this work with Turkish style managers?
You have already made the real diagnosis. Yes, standardized attitude is stronger than ever. Once again, I must share scientific information, I cannot explain it otherwise. Experiments about social prejudices that are now considered to be the classics were conducted in the USA in the 50s. If anyone is interested, they are known as La Piere and Minard experiments. The conclusion they all came to was: Environment can be more influential than attitude when it comes to determining the behavior. Who is a manager anyway? A member of the society. Therefore, we can say that they  also entered a period of change. That is to say, Turkish style management became even the more evident.

Well then, what is the limit of managers’ interference with company culture?
The answer to that lies in the question ‘who’. Let me answer that frankly: A manager can penetrate company culture as far as his power zone enables. This can sometimes be just a few people. As his power grows, his zone widens. However, a real leader can interfere with the current culture altogether.

Can the private sector’s managerial search be applied to public offices? If so, what kind of difference would that create?
I encountered this style twice in my career. The first one was during the Ozal era. Public offices were instilled with managers from the private sector. Do you remember the term ‘princes’? The second time lasted for a short time; after the 2001 crisis, when Kemal Dervis was put in charge of the economy, many contract employees from the private sector were hired for public banks. What was the result? The system surpassed them. It was not sustainable. The texture of public and private sectors are not compatible. The structure rejects it; sees as alien and releases red blood cells on them. Infection begins, temperature rises. The thing to be done is either constant medication feed or taking back the organ. So, it is not possible.

Do we bear a professional point of view while searching for future managers?
1980-2000 was the golden era of the management in the private sector. That was its Tulip Era. I could have said yes to what you say back then; future managers were raised from scratch. Then a different management mentality got hold –not bad, but different-. Daily investment systems  started, not for the future. Managers were expected to manage the job well, not the people. I do not like the terms X and Y generation. I find it standardized, easy, over-generalizing and mostly misleading, yet still there is the reality of the new generation. They have entered the system. That caused a big change in the management mentality; new values and new life styles emerged. By the way, digitalization is also a reform. Becoming unmanned. Working styles and so is management are changing completely.

*WHO IS AHMET ERYILMAZ?
Ahmet Eryılmaz was born in 1954. He graduated from Saint-Benoit in 1973 and Istanbul University, Department of Law in 1978. In 1980 he completed his master’s degree in law in the same faculty. He worked in Garanti and İktisat banks during 1980-1987 as a lawyer, and then as a manager in education and human resources areas respectively. He became a human resources manager in Oyak Renault during 1987-1991. He was the assistant general manager in charge of human resources in Bank Ekspres during 1991-1994. He has been a lecturer in Yeditepe University, Department of Law since 2009. He has also been a board member of Infina Software Company since 2011. He is a blogger, conference speaker, and a management consultant.

*This article was  published in the  November– December issue of Marmara Life.