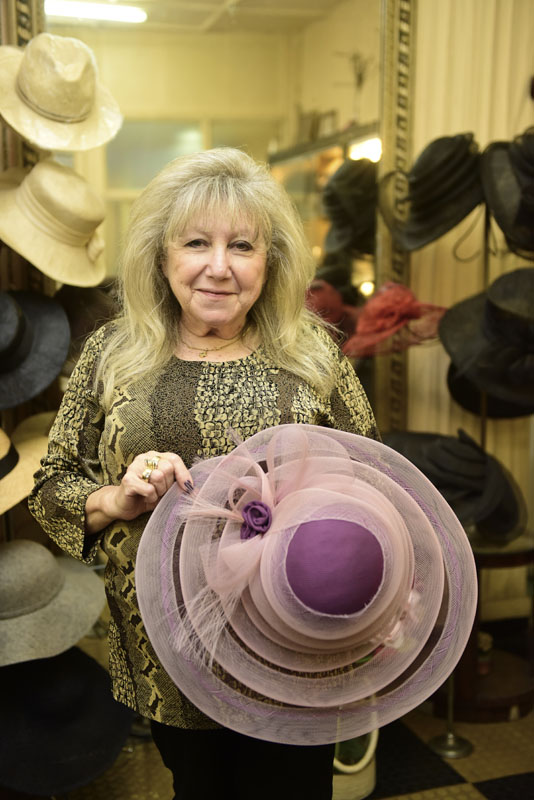 As you walk towards Tunel from Beyoglu are historical buildings on the right hand side, one of those is the Hazzopulo (Hacopu) inn, where there are gift shops, jewelry, adornment, book dealers, tea and coffee shops as well as a store with a humble window. In front of this store is a tiny sign saying: Katia the hat maker.

Until the industrial revolution and ready to use products, clothes and accessories were considered to be an individual’s most valuable belongings and choices, which used to reflect an individual’s social status and design the notion we call fashion, which used to be the magic mirror of societies, traditions and events; while it is still an important part of our current day it has become a major industry. Head-wear or hats which have been used by people for thousands of years are not just simple accessories that protect one’s head from the sun or the rain but it is also an element to bear information about the social status, religious and political beliefs of the wearer, a symbol with multiple meanings and one of fashions major elements. Throughout the years head wears have been able to continue their existence in man’s world through changing size for bigger or smaller adjusting to the fashion of the day. So how did the evolution of hats effect the masters of the trade?

FROM ROYAL WEDDINGS TO BEYOGLU
Headwear which dates back to 3000B.C. was first used in the 18th century in Milan; the popularity which placed it among news from Royal weddings fall towards the second half of the 19th century with the advancement of media and when we came to 1950s it took the lead in the list. During the same decade it was among favorites of woman who wanted to be stylish along with two-piece lady suits, coat and skirts, cloaks, gloves and hats in Beyoglu, Turkey. Business inns with tailors, button makers, skirt pleaters, accessory dealers were among the routes for woman that were out on Istiklal Street. Although many have shut down their business due to industrialization, the humble store of Madame Katia Kiraci where she has been giving life to hats for 28 years is still in business. Once you step into the store you come across Madame Katia who has her glasses on as she tailors the orders with her pin and tread at hand as she carefully styles the hat. The store where Madame Katia makes her hand made hats was opened in her name by her mother Madame Eva in 1960s. Eva, who started the craft at the age of 14 learned the art from a French hat maker. After 1944 Hat-maker Eva started her business in Aznavur Inn, then in 1964 she moved to 37, Hazzopulo Business inn (4c). Finally in 1967 she set “Madame Katia” dedicated to her dear daughter as she continued her custom design hat-making art. Hat-Maker Eva was in her store working on hats until the 70s and 80s, however in 1986 she delivered her last hat and passed on due to her diabetes disease, when her daughter Katia took on her hat-making business and managed to continue the trade until today.

STORE OF FIVE DECADES
Madame Katia is a rare boutique that delivers hand-made custom hats in current day Turkey, she has over 300 designs to choose from. According to the information from Madame Katia the shaped, ironed, sturdy materials used in hat making have in time left their use to lighter and easy to design, tulles that can be decorated with roses and bows. While some of the head-wear designed of velvet, satin, silk organza, crape, abraca materials can be worn as hats, some can be used as accessories for the hair. Madame Katia who wishes for her customers to be happy on the day that they would wear her hats begins the design first by asking about the shoes and hand bag to be used with it and the height and weight of the customer, then she begins her designing process. She completes sewing the hat within two days with materials imported from Italy and France upon measuring the wearer’s head. The color of the material to be used, the flowers to be placed on the side or the front, the brims wide or narrow, the puckers and the angle the hat will be carried are discussed in detail. Brides to be, guests, private party attendees, Gazi Race spectators, or the Royal Ascot spectators travelling to England surely stops at Madame Katia’s store, to consult. Madame Katia does not only provide consultancy for Istanbulites, but she gives service to callers from all over Turkey. She also designs and makes an average of 30 new hats and follows Royal weddings to keep up with trends of head-wear designs and colors. She designs hats for documentary films, theatre plays, television series, and feature films. Madame Katia hopes to turnover her business to her daughter Licha, whom she trained in the trade to continue the business to third generation. Madame Katia informs that her most dedicated supporter is her husband of 50 years Aleco. According to the information Madame Katia shares with us in the 50s the elite and confident woman that visited Istiklal Street would complete her apparel of coat and skirt with a pair of gloves, stylish hand-bag and a suitable hat for sure, however today hats have been limited to weddings, engagement parties and other private events. The recent popularity of period dramas and royal weddings have made her happy, as she informs: “Nowadays we have customers who come here with photos as they aspire to be like Kate Middleton and Meghan Markle. Hats are once again in fashion however it is very difficult to be active with the art these days as we are weakly paid for our efforts, unfortunately with the changing culture there are a few left to cherish the art. This tiny store which gave us the feeling of having travelled in time made us realize that hats were not just an element of fashion but also an important element of culture and perception. Anyone that enters this humble store will embrace not only hats and head wear but also the deep rooted, experienced life, history and clues on Istanbul…

The key is in Debrett’s pages
Debrett’s is a publishing house specialized on books printed regarding the Dos and Don’ts, general etiquette for the nobles and members of high society. Debrett first published “The New Peerage” in 1769 which was somewhat a “Who’s who in aristocracy” where they followed family heritage of the nobles. The book was called Debrett’s Peerage & Baronetage in time, where there were short histories of all families of nobility throughout the country. As Burke’s Peerage provides a similar service it is Debrett’s primary competitor. Beginning from 1900s Debrett began publishing a series of British Etiquette as well.

Turban and Imamah
Turban which was widely used ibythe Seljuk and Ottoman States was a headwear made of a material wrapped cotton cap. The elements that make the Turban valuable are the length of the material wrapped, the embroidery, jewellry and colors used.

Fez Head!
The tendency to follow European clothing trends began during the time of II. Mahmut. The widespread usage of the Fez also dates back to the same period. Inevitably the Fez to become widespread once palace residents started using it. Eventually it became to be the symbol of the state.

Days of Republic and the Hat Act
The Russian word hat “shapka” entered our language and daily life as a result of the White Russian influence. Russians who fled the revolution and started  living in our lands opened hat stores and stared selling to minorities. The widespread usage of hat in Turkey was only after the Hat Act announced by Ataturk in 1925.

Kalpak
Kalpak is a headwear made of fur, cloth or leather with a reversed conic design. It was mainly used in Turkey, Caucasia, Iran, Russia and Middle Asia. Mustafa Kemal Ataturk is known to have deemed the use of Kalpak of importance.

Notes:
According to archeological data the first hat was used  by the Egyptians. Information is that in 3200B.C. Egyptian man wore feathers on their head and the Kings had cloth headwear on their wigs and crowns. The history of the hat, which is more commonly used at Royal weddings, date back to Middle Asia Turks.

*This article was  published in the  November– December issue of Marmara Life.