Mandabatmaz a flavour stop and also a meeting place. Mandabatmaz offering a different flavor to its customers in Beyoğlu, and at the end of almost half a century of journey, it still offers Turkish coffee to its customers with the way on its first day.

Mandabatmaz has been making coffee since 1967. They always make coffee and they make the best Turkish coffee according to their guests. It has been the subject of gourmet programs from 35 different countries of the world and it has been introduced to the world by being awarded by Certificate of Excellence by TripAdvisor. It has already earned its title as one of the places where the best Turkish coffee was drunk in the world.

The Story Of Mandabatmaz
The Mandabatmaz story begins in 1967 on a 9-square-foot tea and coffee-store in the street of Olivia Dead-End on Beyoğlu, İstiklal Street. The three brothers from the district of İliç, Erzincan, have started to operate the tea-coffee store. At that time, non-Muslim citizens (Greeks, Armenians) came from Anatolia, tradesmen are drinking coffee here. The people of Anatolia loyal to their work, make people love themselves. Over time, the difference in the taste of coffee here attracts the attention of customers. At first, the customers around the coffee-tea store are discovering the taste of coffee. Later on the smell, the taste of the coffee spreading from this tiny store became notorious. After a certain date, it is starting to be recognized as a place. In the period when mobile phones are not available, this coffee and tea establishment starts to be called as the meeting place of people at İstiklal Street. People are promising each other as: “let’s meet at Mandabatmaz.” Those who come here drink their tea-coffee while waiting for their friends. Can Özmen, the second-generation operator of the place, cannot remember the date of the first hanging of the sign. One of the customers draws a sign here when this place is called Mandabatmaz. They don’t know who drew it, but they say the original drawings are in their hands.

Source Of The Taste: “Hot Water, High Heat”
It has already earned its title as the best place where the best Turkish coffee was drunk in the world. It was first started to be introduced abroad. They came from more than 35 countries for shooting. Later on, it started to be recognized within the country; Vedat Milor came for shooting and introduced on his television program. The operator Can Ozmen says that: “Food Riot website which is a site introducing interesting tastes all around the world has chosen the seven coffee shops you have to go before you die. The number one is Mandabatmaz.” and he emphasizes that you need to look at the chain rings of flavor for the source of flavor.

The secret of Mandabatmaz’s coffee is not hidden in a single point. There are flavor rings going from the freshness of the coffee beans to the temperature of the cooking water, from the intensity of the fire to the presentation time, We can say that one of the flavor rings is the coffee masters who respect their work with love. Since its first opening, we have to say that this aspect of the Anatolian people, who have been doing their job in love and patience and standing in front of the stove for more than 30 years, is one of the flavor rings.

Mandabatmaz Is On The Way To Be A Brand
The price policy of Mandabatmaz for its customers is always the same. Price policy has not changed according to location alternatives. Turkish coffee here is 7 liras. Operator Can Özmen says; “Here coffee is given to everyone at the same price. The service, the quality of the service and the use of place are provided equally to all.” Some customers who know Mandabatmaz coffee, previously used to buy the ground coffee in the paper bag. When the demand is widespread, Mandabatmaz coffee is available for sale with 250 and 500 grams with Mandabatmaz brand. The brand has been registered, along with the second generation; Mandabatmaz entered the road of branding. They don’t have big goals, but they want to be a World brand in this area. 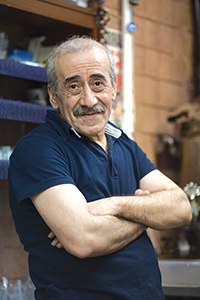 Cemil Filik, The Last Of The First-Generation Operators of Mandabatmaz
None of the three brothers who were the first generation operators of the space are alive. Cemil Filik the last operator of the First generation has recently passed away. Master Cemil has worked for 30 years by the stove and he has just cooked coffee. Thousands of photos of Master Cemil was taken by the people who say “we came to drink the best coffee of the World”, He gave interviews on coffee. Over the stove of a 9-square-foot room of the place, he has a framed picture with facebook messages underneath. These messages say that: “He was brother Cemil of all of us, he was partner of our cheer, sorrow and our beautiful chats with the Mandabatmaz middle sugar coffee which has a reputation spread out of Istanbul.”  “There are some people, they never die, and they live in hearts. You will live in our hearts brother Cemil.” May you rest in peace beautiful man”

Note: At first, the coffee and tea business had no name. In time, customers coming here give the name Mandabatmaz. Customers get too much taste from coffee. The coffee is too dense, the foam does not decrease. In the street conversations, jokes are made like “this coffee is so dense that if a water buffalo gets in it does not sink” . The delicious fragrance surrounding the shop has become notorious. The customers came here over the evaluations like “the coffee cooked here is so charmed and it has a so dense foam that water buffalo does not sink (Mandabatmaz)!” and they start to give their order as “can I have a Mandabatmaz Turkish coffee” The story of Mandabatmaz starts like this.

*This article was  published in the  January– February issue of Marmara Life.