While looking at peaceful and solemn silence of  Zaganos Pasa Mosque, do not bypass Kanaat  eatinghouse which had significant  contributions to the history of  Balıkesir, to cheer  your palate with delightful tastes offered.

Do not think that Kanaat Lokantası is one of the places where only present flavors belong to that region from traditional Anatolian cuisine and is just regular gourmets’ stamping ground. It is a place that has a very important contribution to the city history of Balıkesir at the same time. While looking at the peaceful and imperturbable silence of the Zaganos Pasha Mosque (Pasha Mosque and Social Complex- 1461) your palate cheer up with excellent tastes placed in front of you. We interview with managers of the restaurant from the fourth generation; Mehmet Bayyiğit, Yaşar Özer, Rafet Tuncel. They start by saying that this place is not just a commercial place on food, but it also undertakes a number of missions to carry tradition to modern times.

“Although we do not have explicit documents, I can say that it is a place owned by the master of my deceased father and the one before him and managed by us as the fourth generation.We believed that it was established before the Republic. We have a city archive, and we are trying to find the traces of the history of Kanaat Lokantası which we have explained according to presumptions for the time being. Of course, Balıkesir our city, is a city where a great deal of population movements happened from past to present and the demography hybridized at. This richness has had various influences on both our culinary culture and our daily life. As you know, there is no eating house and restaurant as a trade center in Turkish Islamic culture. There are more caravansaries and hospices. Therefore, we did not think like Westerners at the point of feeding people. We think this job as a charity and service to humanity. As I have just mentioned, those who migrated to the region on various occasions or who came and passed from here, have transformed the logic of the eating house into a restaurant form.”

Popular Place Of The Ones Doing With Less
Mehmet Bayyiğit gives a worthy answer about the history of the place when asked to him why ‘’Kanaat’’, perhaps because it was asked a lot, perhaps he was already doing studies on the history of the restaurant: “Actually, ‘’Kanaat’’ is the name of this place from the very beginning. As you know, doing with less(in Turkish “kanaat”) means being happy with your havings. We can also expand this definition as finding enough, being satisfied, being content with what you have, not wanting more. Satisfaction is, in fact, basically a powerful concept that occupies the universe of traditions and spirit of the people of the period. It is the capability of not having designs on property, goodness, the welfare of the others other than the motivation of being content with what you have. At the same time, this is a very important and positive element in Turkish Islamic culture. It is certainly not slackness but a feature that strengthens the social peace we need so much now. ”

While the peaceful winds blowing from Pasa Mosque and its Kulliye,are entering from the windows with coolness of shadow of cypress, we are listening to the places where Kanaat previously offered service from Mehmet Bayyigit: “Actually, this is not the first address of the eating-house. As the first place was small, the change was required. I could only see 3rd and 4th places. ”The place under the plane tree under the Pasha Mosque was our third place. It was a wooden and nice place, actually. I always remember it had a very nice kitchen. The wood fire was prepared, boiling boilers, the dishes cooked in a cooking stove used to infest the environment in a nostalgic atmosphere. Woods purchased for the stoves used to be moved with camels. In fact, there is a term called camel load which is a measure of how much wood will be taken. Like two camel load wood…’’

Kanaat Lokantası never interrupted his connection with its tradition. Maybe today it does not work like a hospice or public soup-kitchen, however who comes hungry to the restaurant never leave hungry.

Remembering The Past
“Restaurant management has a different social mission. You feed people. This is a very important will of my deceased father to us. It is a principle that we often remind our employees. Everyone who comes here with or without money will surely full up. That is the way. ”

In a manner of speaking, the best brands create their images by blood, sweat, and tears. You can only internalize a principle by insisting as if it became an obsession. Here, the customers of Kanaat Lokantası make their ways to pass Balıkesir in some period of their lives to relive their old memories, to say “May God bless you” to the laborers of Kanatçı Lokantası who passed away from this world by mentioning the past even how old they tasted the flavor of this place.

‘’We have at least forty, fifty years of customers. We also have regulars who ate at Kanaat Lokantası during their childhood or student years, who have come to important positions and even have changed cities or even countries. They come after a taste stuck from their childhood and a memory touched in their heart. They pray to our father. They express their encomia and thankfulness from their hearts. It is expected for us to be happy, to be proud of what we do. We are pleased. Of course, it is important to keep the same taste for years and not disappoint people’s memories. In this sense, it is important for our employees to have a share of keeping a traditional gastronomy culture. The making, method, and presentation of many things have never changed. In this way, those who come to Kanaat Restaurant after decades and eat the same tastes as they are in their memories. “

Tastes Of Kanaat
It is possible to find the most special dishes of traditional Turkish cuisine especially meat dishes like lamb roasting, meat stew, meatballs with rice dipped in egg batter and fried, navarin, wrapped lamb liver burger, “kelle” at Kanaat however can say that its distinctive sign is soup culture. Mr. Bayyiğit also mentions about changing breakfast concept in Turkish cuisine while telling his customers about different types of soups and “pideli paça” prepared by the restaurant in the morning.

‘’There was soup instead of breakfast. This was a part of the historical culinary culture of Balıkesir. For example, tarhana soup used to be drunk. Also, I remember that my mother made “ovmaç” soup. So I’m talking about a culture where many kinds of soups are drunk in the morning. There was no such thing in breakfasts as cheese, olive, jam called Turkish breakfast. Here, we are trying to create a culture where soup is consumed in the morning, or more precisely to maintain this cultural tradition. As Kanaat Lokantası, the main ingredient of our soup menu is bone broth. We have a team only works for them and they boil between eighty and one hundred bones a day. In this sense, the use of both offal and bone broth as a material is conditional upon the formation of a very rigorous hygiene chain. After a long cleaning process, ten-hour boiling time is required. The collagen material in the bone is the source of the healing properties of these soups. Like an orthopedist’s treatment, it becomes the medication to many patients. The bone broth is our distinctive sign. Our soups like “pideli paça”, tripe-soup, “kelle paça”, “ayak paça” are bone broth based. ‘’

KanaatEating-house is a history watchman adopting the principle of providing the transfer of Anatolian-Islamic tradition to the next generations rather than being a business.A solemn place that considers transferring the importance of the concept of satisfaction nourished by our cul-ture graciously and without reproach … It has been waiting for many years for the ones won-dering how an ordinary eating-house has such special missions. Do not wait for your passing by. 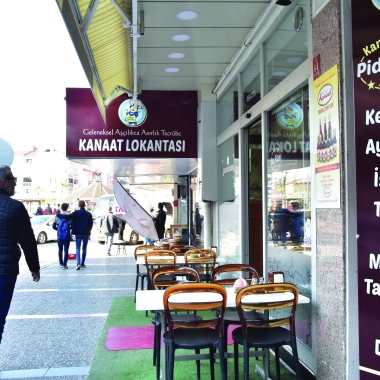 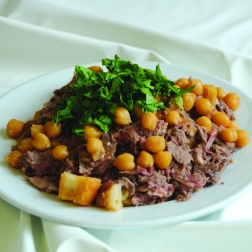 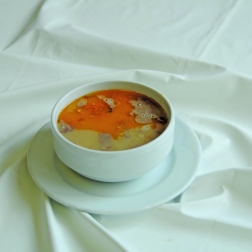 How to cook:
Lamb minced in small pieces is roasted with its own fat and minced onion. When roasting is finished, water is added enough to cover the meat. Salt is added and waited till it boils. After it has boiled, it is taken to the baking tray. It is put in the oven in 1800 °C. It is kept in the oven for approximately 1.5 hours.

* Thyme, cumin and black pepper can be added during the service.

The soup has great value both in Turkish – Ottoman cuisine culture, gastronomy and folklore. It is one of the irreplaceable tastes from childhood to old age, especially in Anatolian culture.The soup, which is preferred as an appetizer in European cuisine, is known as a meal on its own with its regionally varied versions in our culture. It forms the beginning of meal, thus, it is the router of all tastes throughout meal. The journey of the soup in history started in the Middle Ages in the form of aqueous massecuitemade from cereals in the nomadic periods, its different forms emerged over time and traditional rituals of preparing and eating forms occurred.

*This article was  published in the  May– June issue of Marmara Life.